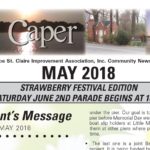 Soon, this gloomy April will be a thing of the past. There’s no better indicator that things are changing by the release of the Strawberry Festival Edition of the Caper. Beau’s message talks about the Pier Projects still ongoing which will hopefully be done soon. There’s also information in his message about the two County led projects which are starting up in May.

Don’t forget, coming up, May 12th from 10am to 2pm at the Clubhouse fields is the Cape St. Claire Volunteer Fire Company Touch-A-Truck fundraiser. It’s an amazing event for the kiddos. Come out on May 19th from 8am – 2pm at the Clubhouse fields for the Cape St. Claire Garden Club’s Annual Plant sale. More information on both of these great events can be found in this month’s Caper. Don’t miss great write-ups from Goshen Farm and CCC in this month’s Caper. There’s great information there as always.

Then, if you haven’t already, set your calendars for THE event of the year. The Strawberry Festival is set to kick off at 10am on June 2nd with the parade from the firehouse. Then, around 11am, things blast off quickly. All of the forms you need are in this Caper. If you’re looking for even more information about what’s in store this year, check out the Strawberry Festival’s website.

See you around the Cape! 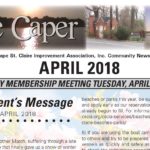 It’s so hard to talk about spring right now. Mother nature can’t seem to make up her mind on whether she wants to warm up or stay cold. Winter doesn’t seem to want to let go as snow is in the forecast again.

In this issue of the Caper, Beau reminds everyone that for those who have paid their yearly lot fees, stickers should be arriving in your mailbox this week. He also wants to remind everyone that the Quarterly Membership meeting is going to be held on Tuesday April 24th, 2018. We will be hosting our State Senator and three State Delegates for a 2018 Legislative Review.

In Community news, Goshen Farm will be holding their Spring Open House on April 21st, 2018 from 11-4. You can learn about its history, visit the sharing garden and high tunnel and learn about the importance of soil health. The Garden Club is hosting their Annual Plant sale on May 19th from 8-2pm. Make sure you mark your calendars. Cape Conservation Corps is congratulating their first Habitat Hero winner. Laura & Don Schrank have spent many hours removing invasive and nonnative plants and replacing them with natives. Read more about them in this issue. It also isn’t too late to get involved in Project Clean Stream, which is on April 7th, AND the Cape Conservation Corps itself. See their website and this issue of the Caper for more details.

Spring IS COMING! Might as well prepare for it and enjoy it when it does. See you around the Cape! 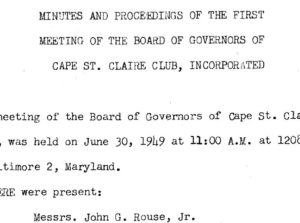 June 30th, 1949. Russians were in the news that day. As it turned out, they had been seizing trucks outside of Berlin. Also that day, the papers announced that Truman’s housing and slum-clearance bill was passed by the House the previous night. It effectively started up the government subsidies for rental housing.

We could’ve picked up a pair of rubber beach sandals for only $2.50 or a diamond ring for $100… or both, they were running a pretty good discount at S and Katz in downtown Baltimore. It wouldn’t have been a big deal to swing by The Hub’s downtown store to grab a $14.88 Seersucker Suit. 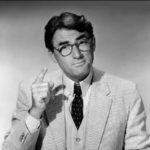 We could’ve gotten our shopping done on the way to the very first Cape. St. Claire board meeting, held in the 1208 Munsey Building, now an apartment complex, in downtown Baltimore. It began promptly at 11am. There were 3 people present. James G. Rouse, James C. Morton, and George W. Baker. Was the room hot and stuffy? Were they sitting around and sipping from a bottle of $2.84 Kentucky Whiskey? Probably not, it was only 11am. Perhaps they were just sipping from their .15 cent Canada Drys. After driving their Studebaker’s? to the meeting, maybe they were thinking about Harry Truman’s message about expanding the program of highway safety. “Last year, 32,000 people were killed in traffic accidents and more than 1,000,000 people injured.” Maybe not. They couldn’t have been thinking about the Orioles as we know it today, they didn’t get here until 1953. The Yankees though, led by Dimaggio had topped the Red Sox 9-7 the night before.

That night maybe they watched Stop the Music by Bert Parks, a name that tune type of game show… it was on at 8pm on WJZ. What we do know was that the Cape St. Claire Club was incorporated on the 29th of June, 1949. They had to pay a bonus tax of $20 and a recording fee of $10. At the first meeting on the 30th, the bylaws were then adopted. They each elected themselves to the board. Due to the correspondences they were expecting, the secretary needed to hire an assistance to help out. $10 a week. After designating the Annapolis Banking and Trust company as a depository for the funds, they adjourned. Maybe they sat around and talked about what they had just done. Maybe they quickly dispersed into one of the scattered showers scheduled for that day.

Either way, I thank them.

The rest is history.

To read the meeting minutes from that historic meeting and the rest of 1949, see below: 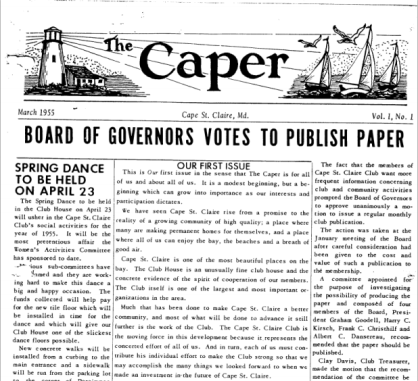 Back to the Future! No not the movie, just in our efforts to upgrade technology, we are testing out our capabilities. Here is the first ever Caper published. We thought we would treat you with a blast from our past for our 60th Caper Anniversary. 60 years? Where has the time gone?